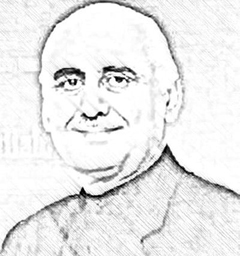 The terrible violence against Muslims by rampaging Hindu mobs in Dehli with the full support of the State, fuelled by Modi’s Hindu India’s madness, should put at rest the rumblings of those who even today question the creation of Pakistan and in their view “the desertion” of the Muslims left behind in India.

This mistaken belief postulates that if partition had not taken, the larger Muslim population would not have been subjected to such atrocities. Historical evidence is overwhelmingly to the contrary and does not point to an era of “peaceful coexistence”. The Hindutva mindset, manifested in Modi’s BJP and the RSS, is completely unforgiving of any form of co-existence with Muslims. Had such a nightmarish scenario materialised we would have, in all likelihood witnessed a genocidal conflict, rivaling the butchery and insanity of the Rwandan genocide. This was brought home very recently in a seminar hosted by the Jinnah Society and the Karachi Center for Foreign Relations in Karachi, recently. The three speakers, Liaquat Merchant, President of the Jinnah Society and the Quaid’s grand nephew, Lt. Gen. Humayun Aziz, Commander, 5 Corps, Karachi, a rare and serious thinking soldier/ intellectual and Ikram Sehgal, renowned defence and geo political analyst, were clear in their highly engaging talks about the Quaid’s vision and view on the subject. In a highly insightful talk Liaquat Merchant shared insightful excerpts from the Quaid’s speeches on various occasions. Once hailed as the ambassador of Muslim Hindu unity, the Quaid did everything in his power for years to agree to a unified India in which Muslims and Hindus could peacefully co exist. But he finally came to the conclusion that partition was inevitable. This was made clear during his talks with Gandhi in 1944 when he, unambiguously declared

“…We maintain and hold that Muslims and Hindus are two major nations by any definition or test of a nation. we are a nation with our own distinctive culture and civilization, language and literature, art and architecture, names and nomenclature, sense of value and proportion, legal laws and moral codes, customs and calendar, history and traditions, aptitudes and ambitions-in short, we have our own distinctive outlook on life and of life. By all canons of international law we are a nation…”

The other issue which continues to rear its head is whether he advocated a theocratic state or one in which religion was a personal matter and not of the state. Proponents on both sides have quoted his speeches to support their perspective. I think the final word on the subject was his now oft quoted speech delivered to the Constituent Assembly on 11 August 1947, in which he again stated unambiguously and clearly

…” You are free; you are free to go to your temples, you are free to go to your mosques or to any other places of worship in this State of Pakistan. You may belong to any religion or caste or creed-that has nothing to do with the business of the State…We are starting with this fundamental principle: that we are all citizens and equal citizens of one State’. We would keep that in front of us as our ideal and you will find that in due course of time Hindus would cease to be Hindus and Muslims would cease to be Muslims, not in the religious sense, because that is the personal faith of each individual, but in the political sense as citizens of the State. However, the Quaid was acutely conscious of the role of religion and faith amongst Muslims . While he advocated a state in which every citizen would have equal rights, he was acutely conscious of the force of Islam and on several occasions stated that Pakistan would be a democratic state based on Islamic principles of justice and peaceful co-existence. In an address to the Karachi Bar Association on 5th January, 1945 he declared

“…….We maintain and hold that Muslims and Hindus are two major nations by any definition or test of a nation. …. we are a nation with our own distinctive culture and civilization, language and literature, art and architecture, names and nomenclature, sense of value and proportion, legal laws and moral codes, customs and calendar, history and traditions, aptitudes and ambitions-in short, we have our own distinctive outlook on life and of life. By all canons of international law we are a nation…..”

“….Islam and its idealism have taught democracy. Islam has taught equality, justice and fairplay to everybody. What reason is there for anyone to fear democracy, equality, freedom on the highest standard of integrity and on the basis of fairplay and justice for everybody….Let us make it [the future constitution of Pakistan]. We shall make it and we shall show it to the world. But perhaps his capstone views on the subject were captured in his broadcast to the people of the United States on 26 February 1948

“…The Constitution of Pakistan has yet to be framed by the Pakistan Constituent Assembly. I do not know what the ultimate shape of this constitution is going to be, but I am sure that it will be of a democratic type, embodying the essential principles of Islam. Today, they are as applicable in actual life as they were 1300 years ago. Islam and its idealism have taught us democracy. It has taught equality of man, justice and fair play to everybody. We are the inheritors of these glorious traditions and are fully alive to our responsibilities and obligations as framers of the future Constitution of Pakistan. In any case, Pakistan is not going to be a theocratic State to be ruled by priests with a divine mission. We have many non-Muslims-Hindus, Christians, and Parsis-but they are all Pakistanis. They will enjoy the same rights and privileges as any other citizens and will play their rightful part in the affairs of Pakistan.

Had he even remotely contemplated a theocratic state which excluded non Muslims from being equal citizens, he wouldn’t have been condemned as a “Kafir e Azam”, as he was by all Muslim religious groups, chief amongst them the Jamiat e Ulema Hind, forerunner of present day, Jamiat e Ulema e Pakistan or JUP of Fazlur Rehman and the Jamaat e Islami, founded by Maulana Maudoodi.

His views on the role and responsibility of the State on minorities was also very clear.

Minorities, to whichever community they may belong, will be safeguarded. Their religion or faith or belief will be secure. There will be no interference of any kind with their freedom of worship. They will have their protection with regard to their religion, faith, their life, their culture. They will be, in all respects, the citizens of Pakistan without any distinction of caste or creed. They will have their rights and privileges and no doubt, along with it goes the obligation of citizenship. Therefore, the minorities have their responsibilities also and they will play their part in the affairs of this State. As long as the minorities are loyal to the State and owe true allegiance… they need have no apprehension of any kind.

It is time we realized clearly, without doubt what our founding father envisaged and work towards his ideals and vision. We must educate Pakistanis, especially our youth, to adopt the Quaid’s creed on minorities. Unfortunately since 1977 we have gone in the opposite direction. Its time to set this right.

The Jinnah Society and Karachi Center of Foreign Relations deserve recognition for highlighting these and other aspects of the Quaid’s vision. But the star of the show, in my opinion was Gen. Humayun Aziz, who stole the show with his deeply insightful and intellectually stimulating discourse!

This article was originally published in dailytimes.com.pk